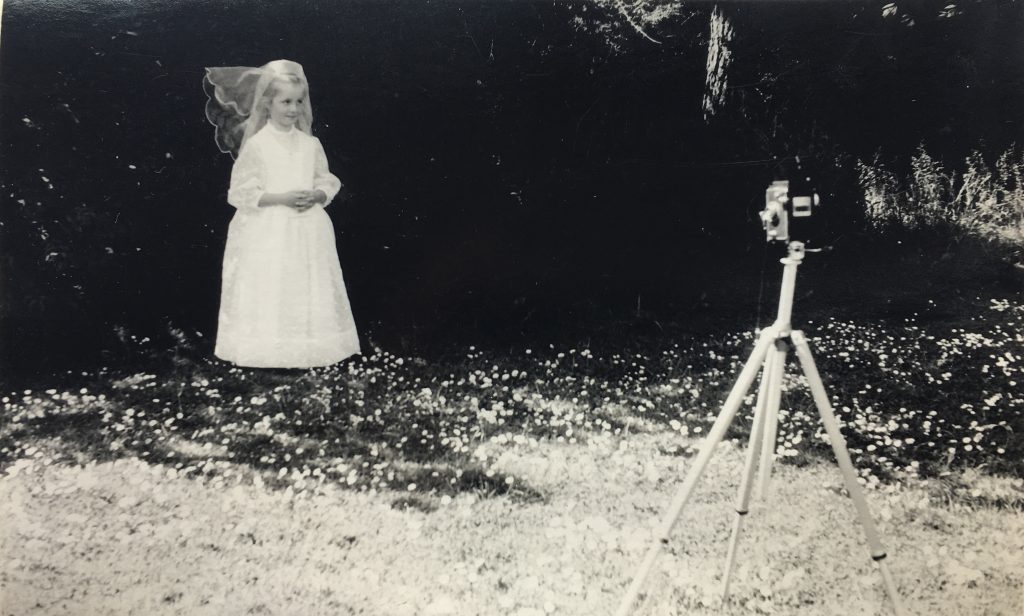 The above, very small image, (it measures 132mm x 82mm) is a family heirloom of my wife’s family.

No one knows when it was taken, nor who the subject is. But, the image arouses curiosity for many other reasons, not just its unknown subject and the date of its capture.

The camera on the tripod looks like an old 2 1/4″ x 2 1/4″ Rolleiflex twin-lens reflex, or similar. But, the viewing hood on the top, which the photographer would look down into to focus and compose the image, is clearly closed; so, either it has already done its work, or is about to.

The subject herself (a First Communion celebrant?) makes no attempt to engage with the camera which has captured this moment. Nor, indeed, does she make any eye-contact with the camera on the tripod. Her attention is firmly fixed, off-camera, to the right of frame, on something, or towards someone we cannot see. Clearly, the photograph we see is a document on the part of the photographer, a testament to having been there in true Instagram-style (albeit, pre-all-things-digital, not just Instagram!) of having witnessed the occasion as is so often the case, without the consent, knowledge or input of the participants.

The apparent honesty and frankness of the moment and, in particular, of the subject, recalls the writing of Susan Sontag and her note from On Photography is worth recalling…

“There is something on people’s faces when they don’t know they are being observed that never appears when they do [know]…their expressions are private ones, not those they would offer to the camera.” p.37

But, the most interesting enigma in this image is the child’s pose. She stands ethereal, appearing to almost hover above the ground. In addition, her veil, despite there being no apparent wind in her hair, fans out behind her. (Bear in mind that this is very much a time before Photoshop.)

Was she asked to stand on something hidden beneath her in order to make her dress form a perfect, unruffled circle around her, and for her to appear to float angelically above the ground? As she stood to pose, did her veil become caught in the bushes behind her? Or, was its placement part of the same knowing ruse to create a suitably beatific atmosphere?

Undoubtedly, the effect, if it was deliberate, is successful. The impression is of someone added to the image post facto; a kind of perfect ghostly manifestation. And, if it wasn’t a deliberate attempt to conjure up something other-worldly, then the chance occurrence that we witness, in all its eerie luminescence,  is all the more uncanny.

We may never know what the intentions were of those present on that day. But, Lewis Carroll would have approved.